The Islands regions is the most diverse of the whisky producing regions in Scotland. It comprises of all the Scottish islands with the exception of Islay, which is classed as it’s own ‘region’. The islands producing whisky are the Isle of Skye, Mull, Arran, Orkney and Jura. Orkney in off the northern Scottish coast and the other islands are on the west coast. Some whisky experts don’t class the islands as a region in itself but put them together with the Highlands.

Being the most diverse of the Scotch whisky 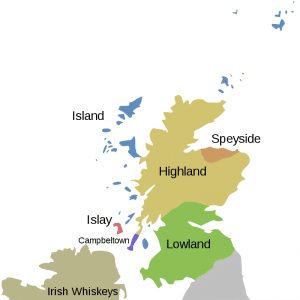 producing regions the whiskies produced on the islands are varied with no real similarities. What is common with them all is a sweet pungent aroma and taste which is in perfect harmony. Because of the distilleries being near the sea there is a marked salinity to the whiskies. Some of the whiskies will be peatier than the other, with Talisker from Skye being a notable peaty whisky.

Isle of Skye. There is only distillery on the island and with the island being located on the west coast and having the Atlantic ocean on one side means that the isle is battered by the elements. Here Talisker is produced. It has a very peaty flavour and is similar to the whiskies produces on Islay. Because of it’s uniqueness this is one of the six classic malts.

Isle of Mull. The isle of Mull is home to one of the oldest distilleries in Scotland. Tobermory was founded in 1798 under the name Ledaig. Over the centuries the distillery has undergone changes in ownership and at one point was even used as a power station. The distillery produces two main whiskies – Ledaig which has a pronounced peatiness and Tobermory which is sweeter and less peaty.

Isle of Jura. This island is located very close to Islay, but produces a whisky unlike those from Islay. The island’s distillery was re-opened in 1963 and produces a very strong whisky with very few peaty overtones. They produce a number of whiskies ranging from 10 to 18 years old. There are some unusual superstitions on the island, one of them being the use of the ancient Egyptian Ankh. This symbol appears on some Jura whiskies.

Arran. A fairly latecomer to the distillery scene, the Arran distillery was established in 1995. The first ‘whisky’ to be produced was a 1 year old. It couldn’t be sold as whisky, so it was labelled as ‘Arran 1 yr old Spirit’. The first true whisky was produced in 2006 – a 10 year old. They like to produce interesting special editions including a Bordeaux, a Calvados and a port.

The Orkneys. There are 2 distilleries on the Orkneys, Scapa and Highland Park.

Highland Park. This is Scotland’s most northerly distillery. It is situated on a hillside and is battered by the elements. The names comes from the High Park, where the distillery sits. It sources it’s barley locally and the local mineral rich springs, from where the water is drawn all combine to produce a very distinct whisky. It has won many awards including “The Best Spirit In The World”

Scapa. Not a very large distillery but produces some fine whiskies, the youngest being 14 years old. There isn’t a peaty flavour to the whisky but a distinct honey flavour to it.

The Islands whiskies produce some very diverse and distinct single malts. There is certainly something for everyone’s palate – ranging from peaty whiskies to sweet honey flavoured ones.