The brand started out by John Walker (referred to as Johnnie Walker) around 1820. Johnnie started producing whisky in the town of Kilmarnock, on the west coast of Scotland. It was originally known as Walker’s Kilmarnock Whisky. The brand was popular at the time, but it was his son and grandson (Alexander Walker and Alexander Walker II) who are credited with making the brand popular. When John Walker was selling his whisky, it only accounted for under 10 percent of the firm’s income, by the time that Alexander passed on the company, it accounted for over 90 percent of the firm’s income.

Johnnie Walker As A Brand

The whole design and concept of the brand was originally designed for marketing purposes. For example, the square bottle, which

has become an icon of the Johnnie Walker brand was designed that way so that fewer bottles were broken. The iconic Johnnie Walker (JW) label, positioned at exactly 24 degrees meant that more could be put on the label and it would stand out on the shelves.

Here are some short descriptions of the Johnnie Walker Scotch Whiskies that are on sale. These are listed in order of quality and price.

Johnnie Walker Red Label: bottled at 40% ABV and is a blend of 35 grain and malt whiskies. It is the cheapest of the Johnnie Walker whiskies and contains the most grain content. It is not intended for drinking straight but for mixing. It is the best selling blended Scotch whisky in the world. It was the family’s goal to make this the most popular whisky in the world and they did this by creating one of the world’s first truly global brands. The main single malt used is Talisker from the Isle of Skye in the Island Scotch Whisky producing region of Scotland. The red colour symbolises vibrancy – this was to appeal to the new generation that was targeted by this blended whisky. 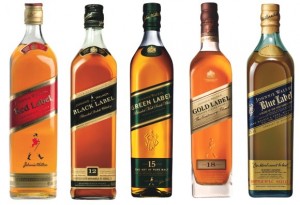 Johnnie Walker Black Label: bottled at 40% ABV and about 40 whiskies are used in the blend. Each is at least 12 years old. This is the benchmark by which all blended whiskies are measured by, and the classic deluxe blended whisky. It was John Walker’s son, Alexander who developed this iconic blended whisky. He took inspiration from the blending techniques learned from his father and created this blend with a distinct smokiness to it. It started by being called ‘Special Old Whisky, but then in 1909 it was re-branded ‘Black Label’. Black has always been associated with sleekness and elegance, and that is what is summed up in Black Label. The main single malt whisky used is Cardhu, a high quality Speyside single malt whisky. Whiskies from Islay and the Islands also feature heavily in Black Label.

Johnnie Walker have also released Double Black Label (click here to find out more about it). This is based on the Black Label blend, but as the name would suggest – it’s more intense. It has an intense smoky flavour to it, thanks to the addition of more Islay whiskies. But there is also a sweetness that comes through. It’s certainly an interesting addition to the JW range and will not fail to please those who love Black Label.

Johnnie Walker Green Label: blended malt which uses only four malt whiskies and no grain whisky. This is to give the blended whisky a true sense of Scotland, with each malt whisky coming a different part of Scotland. The whisky uses malt whiskies which have been matured for at least 15 years. It has received a number of awards, the latest being in 2012 at the Whisky Bible’s Vatted Scotch Malt of the Year. This is set to become a collector’s item because it was discontinued at the end of 2012.

Johnnie Walker Platinum Label: bottled at 40% ABV and uses single malt whiskies and grain whiskies that have been matured for at least 18 years. This combines to make this a truly special whisky. It has an intense, yet smooth taste with hints of smoke.

Johnnie Walker Blue Label: The premium blended whisky. It is bottled at 40-43% ABV and has no age statement. Johnnie 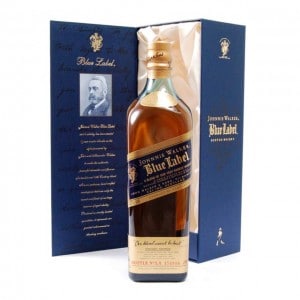 Walker Blue Label recaptures the character and taste of some of the earliest whisky blends. Only the rarest malt whiskies are used to create Blue Label and drinking this you will get the sense of blended whiskies from the 19th century. In fact it is thought that some whiskies used are from the 19th century!. Each bottle is individually numbered and sold with a certificate of authenticity in a silk-lined box. This blended whisky outclasses even some of the best single malt whiskies. The main malt whisky used is Royal Lochnagar, which is near the Queen’s Scottish residence at Balmoral. So the ‘blue label’ is fitting for this blended whisky with Royal connections.

Johnnie Walker have also started blending exclusive Scotch whisky blends for the duty free market. They have created some fantastic blended whisky to celebrate the travels of the Walker family and they set out to evoke in whisky drinkers the tastes and cultures of the farthest flung places of the earth. Check out for example, The Gold Route blended whisky.

So what started out as a small enterprise in a small town on the west coast of Scotland has grown into a global brand. The company is now owned by global drinks brand Diageo. Johnnie Walker is the most widely distributed Scotch whisky in the world with annual sales of over 130 million bottles.