The story of Glenfiddich Scotch whisky starts in 1886. William Grant, together with his 9 children start to build a distillery by hand. It took about one year to finish the building work and in 1887 the distillery was ready. On Christmas day on that year the first drops of Glenfiddich were produced.

The name Glenfiddich is Gaelic for “Valley of the Deer”. The distillery is unique because it’s one of the few single malt distilleries which is still family owned and it is one of the largest producers of Scotch whisky in the world. 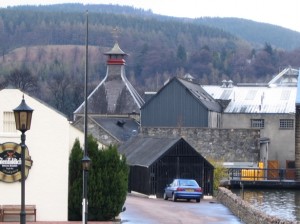 It is set in the Speyside region of Scotland, which is the very heart of whisky production. Speyside boasts the largest proportion of whisky distilleries. It is a beautiful part of Scotland and one cannot help but be impressed with the location of Glenfiddich.

Over the years not very much has changed. The same warehouses built by William Grant & Sons are still in use today. The family is able to draw on the years of experience that has been passed down from one generation to another.

One of the most difficult periods of whisky production was during the 1920s. Prohibition was in force in the United States and because of this, many whisky distilleries went out of business. In fact, at the end of prohibition, only 6 remained. One of these was Glenfiddich. Using astute foresight Gordon Grant (grandson of William Grant) actually increased production of whisky during that time. This meant that when prohibition ended, the distillery was able to meet the demand for whisky in the United States.

Glenfiddich was also the first single malt whisky to be promoted outside of Scotland. Up until that time most whisky producers concentrated on promoting blended whisky. It was felt that the unique and specific taste of single malts wouldn’t go down too well. However Sandy Grant Gordon, William’s great grandson saw things differently. His vision paid off. More and more people started to appreciate the delicate tastes and flavours of single malt whisky.

Over the years Glenfiddich has produced some rare and collectable single malt whiskies. In 1987 to celebrate their 100 years of whisky production they bottled a special centennial single malt.

One of the rarest Glenfiddich single malts was produced in 1991. Whisky from nine casks that was distilled in the 1930s was used and brought together. The nine casks were to represent each of William Grant’s children. They were married together to produce this 50-year old whisky. (Click on the picture below to buy this). There are only 500 bottles of this produced and they will be only released 50 per year. 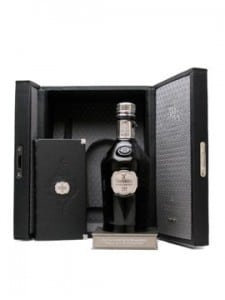 Then in 2001 they released their oldest whisky, a 64 year old single malt. So much spirit had evaporated over the years since 1937 that only 61 bottles were left in the cask.

In 1998 Glenfiddich use a system called the Solera Vat to produce their 15 year old expression. This is a process usually employed in the production of wine and brandy. At the distillery they keep a large vat full of whisky and it is never less than half full. This is constantly topped up with newly produced whisky. So it means that there are whiskies there which are much older than the 15 year old age statement. Then every so often whisky is removed for bottling. Glendiddich use 15 year old whiskies from three different types of casks – bourbon, sherry and new oak.

Of course the production of single malt whisky at Glenfiddich is similar to how all whisky is produced. First of all barley is soaked for 2 days in which time the barley started to germinate. The barley is removed and the germination process continues for 4 to 5 days. During this time the starch in the barley turns into sugar. It is then dried in a kiln.

The malted barley is then ground into a coarse type of flour and is mixed with heated water from the nearby spring. This is then poured into ‘mash tuns’. In these the liquid is constantly mixed and lifted and this ensures that all the starches turn into sugar. The sweet liquid that is left is now called ‘wort’.

The next step in the process is the fermentation. Yeast is now added and it is fermented in vessels called washbacks. What is unique with Glenfiddich is that they don’t use stainless steel washbacks, but wooded ones made from Douglas fir. The liquid is heated to 33c and the bubbling froth produced is kept down. This happens for around 64 hours until the froth subsides. 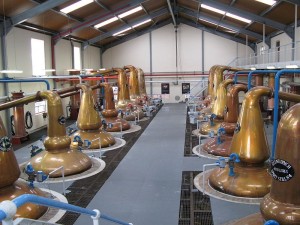 The next step is the distillation. The liquid is transferred into large copper pots. The ones used at Glenfiddich are exactly the same as the ones used by William Grant, including all the bumps and dents.  These are heated up and the alcohol starts to turn into vapour. This rises and flows through the narrow neck at the top of the still. It then cools down and the process happens again, only this time in smaller stills. The resulting liquid is now spirit of around 70% alcohol – a new Glenfiddich is born. This is then reduced to around 63% by adding natural spring water. It is then transferred into oak casks.

Casks Used at the Distillery

Casks that have previously held spirit, usually sherry or American bourbon are used. The oak wood allows the spirit to breathe. It’s the job of the coopers to re-assemble, inspect and care for the casks. They assemble around 25 each day. They are then tested and at the distillery they uses sherry, not water to test them. This ensures that the casks aren’t compromised.

The next step is the waiting game – maturation. Scotch whisky as to mature for a minimum of three years. However, in order to produce a high quality whisky, the spirit is left to mature for at least 12 years. The casks are left in dark, damp warehouses. This is the best environment for maturing whisky. Also during this time the whisky breathes – it absorbs the surrounding air (that is why whisky from distilleries near the sea have a distinct saltiness to them) and also gives off vapour. This is why many distillery warehouses are black on the outside – it’s a chemical reaction of the vapour and the stone. Around 2% of whisky is lost in this way.

Glenfiddich is the only single malt which is ‘married’. Each distillation is different. So in order to produce a high quality whisky, the whisky from the different casks are poured into at Marrying Tun. The whisky is kept in these Tuns for around 9 months. This helps the distillers maintain a consistent flavour, aroma and palate.

When the whisky has mature for the specific amount of time, it is now ready for bottling. Spring water is added to this to reduce the alcohol to around 40% ABV. Glenfiddich is unique in the fact that the distillation, maturation and bottling all happens on-site. Only water from a single spring is used.

The entry range Glenfiddich single malt is 12 years. They also produce single malt whiskies of 15 and 18 years old, as well as older and rarer whiskies.

The Glenfiddich Family (Click on a bottle to buy)

In 2009 Glenfiddich released their 50 year old whiskies. These are in individually hand blown bottles with a hallmarked silver plaque and finished in hand-stitched leather.

Click here to find out more reasons why Glenfiddich is a unique Scotch whisky. Check out our list of 10 Unique Factors About Glenfiddich Single Malt Whisky

1887
William Grant fulfills his lifelong dream and begins to build the walls of his distillery with the help of his nine children and a mason. He named it Glenfiddich, the Valley of the Deer in Scottish Gaelic. After a year of hard work, the first drops of whisky flowed from the copper stills on Christmas Eve 1887.

1923
Prohibition is in full swing. Grant Gordon, William’s grandson, joins the family business and astonishes the industry by increasing the production of whisky. With the change of decade and legislation, Glenfiddich is one of six distilleries still operating in Scotland, ready to meet a new surge in demand for quality whiskies, aged in Scotland.

Charles Gordon, William’s great-grandson, insists that the distillery should have its own boilermakers. They are skilled craftsmen, highly sought after, always ready to shape our copper stills with great originality.

Grant Gordon had never underestimated the fundamental role that casks play in the making of exceptional whiskies. After bringing boilermakers to the distillery, he arranged for a cooperage to be built. Today, we are one of the few distilleries that continue to have their own cooperage.

1961
Water, air and malted barley. A trio skillfully brought together to make Glenfiddich whisky. This trio inspired the famous 20th century designer, Hans Schleger, to create a bottle with a radically new shape, our triangular bottle.

1963
Sandy Grant Gordon, William’s great grandson, is so proud of our Single Malts that he is working hard to promote Glenfiddich whiskies outside of Scotland. Consumers around the world who are used to drinking blends are discovering the flavours of single malts. Until then a well kept secret by the Scots.

A special date for our distillery. We are celebrating its 100th anniversary by making a commemorative whisky in honor of our founder and his dream to make the “best whisky in the valley”.

One of the rarest and most sought-after whiskies for collectors is born. The first vintage of Glenfiddich 50 Years Old is produced from 9 casks chosen in the 1930s in honor of each of William Grant’s children who helped build the distillery.

Inventions are multiplying at Glenfiddich, the distillery more independent than ever. With more than 35 years of experience and recognition by his peers, our 5th Cellar Master elaborates a process of ageing in Solera casks. A revolutionary process used to create our 15 year old whisky. A blend which, to this day, is renowned for its complex and intense flavors.

We market the oldest Single Malt. In 1937 the summer n° 843 was filled and began its slow maturation which was to end 64 years later. Over time, ten successive cellar managers watched over it, letting the angels take their share, so that 61 bottles of an extremely rare whisky were born.

Second vintage of our 50 years old. Only 50 individually numbered hand-blown bottles will be marketed each year. A silver leaf from Scotland bearing the William Grant & Sons trademark is inlaid in each bottle placed in a leather case, similar to the leather-bound journal that William treasured.

Exceptional snowfalls cause the collapse of several cellar roofs, exposing the precious ageing barrels to the bad weather of winter. Our employees work night and day in the cellars at -19°C to save all the barrels. As a tribute to them, our Cellar Master selects some of the barrels from the damaged cellars to create a limited edition of Single Malt, born from adversity.